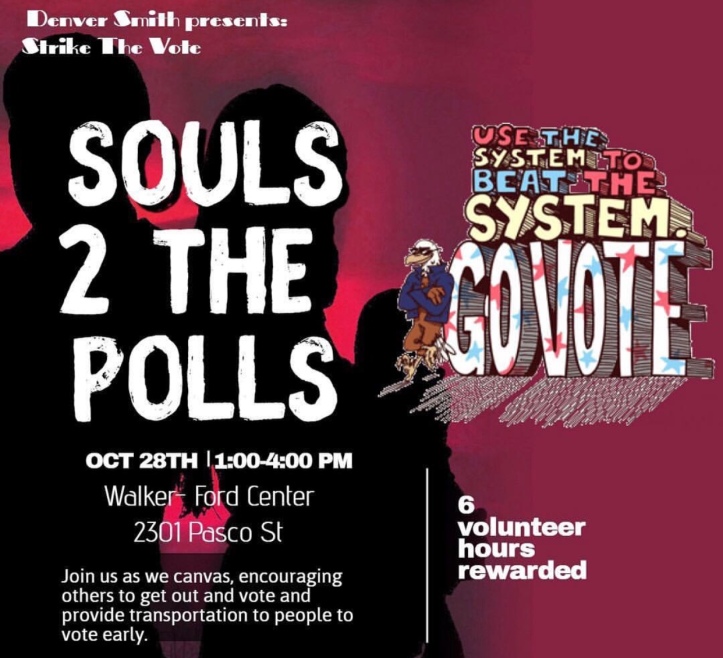 In an effort to get millennials involved with this year’s midterm election “Souls 2 The Polls.”

This event is open to Tallahassee college students on October 28 at 1 p.m. to 4 p.m. at the Walker-Ford Center. Participants can earn community service hours for helping to canvass the area to encourage people to vote. There also will be food and transportation to voting locations provided.

On November 6 Floridians will have the power to elect the next governor and other important officials such as the mayor of Tallahassee.

But young voters notoriously neglect the importance of voting. Millennials represented almost 50% of the country’s voting population in the 2016 election, according to the U.S. Census Bureau.

Jasmine Ali, one of this year’s candidates for Leon County Commission District 1, could be the youngest person of color to be elected in Florida at the age of 21 if she wins. According to Ali, a student at Florida State University, the importance of the millennial vote is crucial.

“It is important that young people get involved with politics. By doing this, as a society, it can be ensured inheritance of our government’s system occurs,” said Ali.

In 2016, only 19% of people aged 18-29 cast their ballot in the presidential election; at 49%, 45-64-year-olds accounted for the largest electorate last year, according to the Census Bureau.

Tallahassee City Commissioner Candidate Dianne Williams-Cox stresses the importance of the young people’s vote. “Don’t let others select your leaders. You have the power to select your country’s leaders. Every vote is of equal power.”

Williams-Cox has organized different tactics to get young voters involved.

“I post on Instagram, Facebook and all social media outlets to ensure all age demographics — especially millennials — are involved in my campaign. The youth are lobbyists for change,” she said.

Karrie Williams, a 23-year-old receptionist for Congressman Al Lawson, feels as though her generation has dropped the ball on voting. “We cannot have our next governor call us monkeys! It is unacceptable. I strongly encourage voting… early voting.”