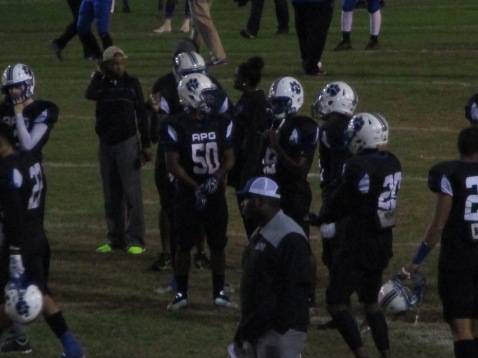 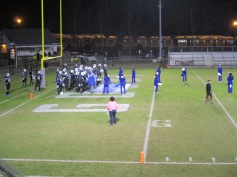 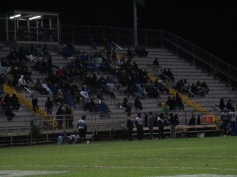 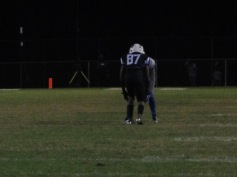 The Godby Cougars could not keep the magical revenge tour going, as the Trinity Christian Conquerors defeat their I-10 rival 33-21, to move on in the playoffs.

The two team’s defenses suffered breakdowns early, as both offenses found success with their game-plans, and went into half-time tied 14-14.

Trinity made their adjustments, as the conqueror defense dominated the second half, holding the cougar run game to just 46 yards for the game. Trinity continued to feed their work horse Marcus Crowley to a bruising 130 yards rushing, also creating two interceptions that gave them an insurmountable lead in the fourth quarter.

The hometown cougars were coming off their first playoff win since 2014 against Ponte Vedra High School 28-18. The Conquerors are defending state champs, but escaped with a 3-overtime victory with Jacksonville power Bolles.

Trinity Christian has owned the Godby the last two years, as they completely beatdown the Cougars 42-7 last year, one of the building blocks that led to the resignation of the Head coach at the end of the season. Trinity now has beaten Godby three times out of the last five.

“Of course, this isn’t how we wanted the season to end, especially who we lost to, but it shows what type of coach we have in Corey Fuller. He came in wanting to change two things, the kid’s toughness, and their confidence.” Said Robert McKay, the running backs coach for Godby.

“Going 11-2, after having the majority group of kids that won just three games the year before is proof that he did just that.” He said.

Godby has come a long way from back to back losing seasons. The acquisition of Corey Fuller as the head coach has brought the swagger back to a program that had not missed the playoffs in 15 seasons before 2015 and 2016.

“It’s bittersweet, but I love seeing how the guys grew up from when they were young freshman that didn’t know anything, to senior leaders of a championship caliber team.” Said Desmond Williams, A former offensive coach for Godby from 2011-2016.

“Some of the major differences I saw in the team was they were much bigger and more physical on the offensive and defensive sides of the ball. They were able to bring the best out of Rasean, which gave them more consistent quarterback play, the new offensive coordinator in Jacquez Green did an excellent job with putting the players in position to be successful, honestly the all-round confidence the new staff brought to the team, looked to help the players close out games way better than when we were there.” Williams went on to say.

This is actually the second trip to Tallahassee for the conquerors this season, as they defeated Lincoln High School 35-21 earlier in the season. Trinity moves on to play the #1 seed in class 5A West Florida High School, for a chance at another championship.

As for the Godby, Corey Fuller seems to have the plan to be successful. Learning from the mistakes of this year will be key, because all roads to Orlando for may well lead through Jacksonville, and the Trinity Christian conquerors again next year.

Godby Cougars Spook the Rickards Raiders 21-6, as Friday the 13th was the night the next chapter of the 60 year rivalry was written.

Both teams came into the game undefeated, and the winner would of course take home bragging rights, most importantly take home the district title. “This is the biggest game between the schools since 2013.” Said Robert McKay, the running backs coach for the Godby Cougars.

The game was a defensive battle, as 10 total points were scored in the first half. In the second half, the running of Tony Street would prove too much for the Raiders as 58, of his 107 rushing yards would come on one run in the fourth quarter to eventually be the deciding play of the game.

The Cougar defense did an excellent job of stalling a high powered Rickards offense. The unit was led by Tarian Lee Jr, as he play like an absolute mad man as he would finish with 6 solo tackles, 8 total tackles, 3 tackles for loss, 3 sacks, and 1 interception with a 1 minute left of the clock, talk about a performance!

People who have been tied to the game, or the two schools know that the rivalry goes deeper than just the games itself.  The Southside of Tallahassee was rocking as over 5,000 people filled Gene Cox Stadium, and didn’t not stop people from standing by the gate one the stands were full.

The State Capitol Doesn’t Have a YMCA?

As of September 30th, 2017 Tallahassee, FL will not have a YMCA open to the community.

Though the location is borderline relative to our website, Southside Living, being a former employee of the YMCA, I felt it was necessary to express how the YMCA being gone, will affect not just those on the Southside, but in the entire city.

The YMCA may have been located on Apalachee Parkway, but it was a common point for so many in the area, no matter your status to society. The facility offered summer camps, and holiday day care programs, as well as youth sports leagues. What made the difference was all of those programs were available to anybody, many parents were eligible for scholarships, which made the payments for trophies and equipment a lot easier on the pockets.

Those Scholarships were also available to people who just wanted to join the YMCA to enjoy the workout equipment, a heated swimming pool, and the many group exercise classes that aren’t available at many of the gyms located across the city. The YMCA also values on making fitness comfortable for all ages. Majority of the members were older due to the atmosphere of a Golds Gym, or Planet Fitness, make anybody over the age of 40 want to give up all hope of trying to stay fit because of the more youthful crowd, and high paced, new age workout routines that can freak some people out..

How did the State Capitol get to the point of not having a single YMCA? “The board of trustees have decided to close down the Apalachee Parkway location due to financial reasons that can’t be discussed at the time. It truly is a sad time right now, these members, and kids that I have seen grow up over the years are like family to me at this point.” A quote from the former Director of facility Terrance White.  Note that one of those board members is Erwin Jackson, Founder of Jackson Properties, and owner of the many Properties located on Jackson Bluff. Mr. Jackson failed to get back with me with a statement.  With the closing, an unexpected change is about to happen for the children, and parent, also the elderly that were members.

First off, some of the children have been enrolled in the day care programs, and sports leagues since they can remember and have a special attachment to the YMCA as any one. Taking these affordable programs away of course give parents a task of finding more expensive daycare options that most likely doesn’t come with any type of price reduction. Youth sports is critical for the development of children, the YMCA leagues make it more about the experience in most cases, instead of a winning is the only thing that matters type of youth leagues, that can be crippling to a young mind.

The adult members that attended the Y have more of an adjustment, as many of them had gotten a costumed to a certain schedule to their life, which included the YMCA.  I caught up With Pamela White, a member of the YMCA for the last thirty five years, and asked her how she thinks life without the YMCA is going to be? “Well I’ve been a member here for about 35 years, and watched my kids grow up in this place, both of which are in their early 20’s now. So seeing this place close down is definitely hard.” “I’m in my late 50’s, and have gotten used to the machines, the other members, and the great staff. Now that I have to go Golds Gym, way across town, and get used to a whole new atmosphere has my head spinning, I’m not going to lie.”

As a result of closing The YMCA in Tallahassee, FL, the Board of Trustees won’t feel the impact that it has. Now of course it wasn’t the flashiest facility compared to other facilities in various cities affiliated with the YMCA. The many state workers and elderly found the convenience, and home feeling more important than the glitz and glam, of more popular gyms. Now hundreds of children, and adults have to change their entire lifestyle due to “Financial Reasons”, That Board of Trustees does not want to discuss goes against the exact foundation of what the YMCA stands for, doesn’t it?